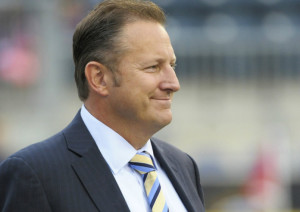 Heading into their 16th season, the National Lacrosse League is looking to spark new life into the sport of lacrosse with the announcement that Nick Sakiewicz has been appointed as commissioner of the NLL.

Sakiewicz has spent over two decades with Major League Soccer, most recently as the co-founding partner and CEO of Keystone Sports and Entertainment, the ownership group of the Philadelphia Union of MLS. He plans to take his experience from the MLS and use it as a pathway towards success for the NLL, a league he says greatly resembles the MLS’s early years.

“I’m honored and excited to join a tremendous group of owners and lead the National Lacrosse League as NLL Commissioner,” Sakiewicz said. “Similar to soccer 20 years ago, lacrosse is a dynamic and rapidly-growing sport amongst an incredible demographic in North America. The National Lacrosse League is celebrating its 30th anniversary season featuring the best players in the world and highlighted by some incredibly entertaining competition. I’m really looking forward to bringing my experience working in MLS to the NLL and helping everyone in the lacrosse community to grow the league and expand the sport.”

As an original founding executive of the MLS, Sakiewicz has watched the sport of soccer grow exponentially over the last two decades, both professional and recreationally. The same, in recent years, can be said of lacrosse.

According to a report done by BuzzFeed back in 2014, lacrosse is actually the fastest growing sport in America, far surpassing the growth-rate of soccer.

For Sakiewicz, though, he hopes to expedite the process that helped get professional soccer to the place it is in 2016, a process he says has taken 40 to 50 years. He believes that the growth of the NLL will come down to four key areas: The expansion of the league, with new franchises being created in passionate markets; an improved digital platform to help bring the excitement of lacrosse to more and more people; the grassroot development of youth development academies; and the continued growth of TV partnerships.

Sakiewicz admits that it’ll be a difficult challenge; the biggest hurdle, as he believes, is simply that not a lot of people in America know that the NLL is offering a great, exciting product.

But that’s exactly why Sakiewicz believes the NLL has the ability to grow into one of the United States’ most adored sports leagues: Lacrosse is an inherently exciting, dramatic, tough sport, and as sports fans are introduced to the game, they’ll come to love it as much as he has.

And it’s that passion and excitement that led the NLL’s Board of Governors to unanimously approve Sakiewicz’s appointment.

“The search for a new Commissioner included consideration of more than 150 candidates, all of whom had significant professional accolades and accomplishments in and out of the sports business,” said Steve Govett, Chairman of the NLL’s Board of Governors. “Nick’s experience in helping to launch and grow Major League Soccer and several of its franchises was incredibly appealing, as was his passion for our product. His vision and expertise in league and franchise management, as well as his intimate knowledge of corporate partnerships and expansion, made him the ideal candidate to lead the National Lacrosse League and take it to new heights.”

The NLL still has a long way to go before they’re on par with the likes of the MLS, but if there was ever a man for the job, it would be Nick Sakiewicz.