As many of his peers have taken end-of-summer vacations, National Lacrosse League Commissioner Nick Sakiewicz continues to crisscross the country almost incessantly for work. “I’m a little jealous,” said a tongue-in-cheek Sakiewicz, who has been on the job — and on the move — since January. 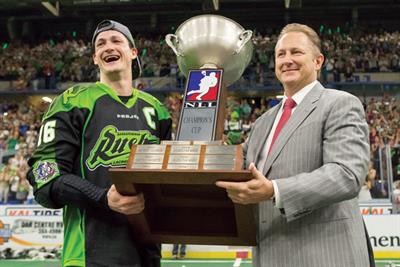 Sakiewicz has embarked on a five-year plan to boost the relevance and revenue of the 30-year-old indoor lacrosse league, which has strong Canadian roots but is less prominent in the U.S. than the outdoor version. On the to-do list: Expand the number of franchises substantially from the current nine; build a digital platform; create a team services group; assemble a commercial sales group after previously working with an outside agency; and form a grassroots lacrosse program. The NLL is also evaluating selling a title or presenting sponsorship for the first time. The effort by the league, which says it averaged about 10,000 fans a game this past season, will cost owners eight figures over five years, its most expensive single initiative ever. But Sakiewicz said his plan wasn’t a hard sell to league ownership, which includes pro team owners Stan Kroenke, Terry Pegula and Calgary Sports & Entertainment.

“They never had a focused or sustained strategic plan over these 30 years, and the league has basically survived on the merits of the strength of the product,” said Sakiewicz, who succeeded George Daniel as league commissioner after 20 years with MLS and several of its teams. “So going into this, we sort of stepped back and said, ‘What do we need to do here, and what are the basics we need to put in place that we did at MLS and other leagues have done to grow their sport?’”

The NLL plays its season in the winter and spring and has been around since the mid-1980s. Some of its players also play in rival Major League Lacrosse, a nine-team summer league that began play in 2001 and consists entirely of U.S. franchises.

The NLL has brought aboard investment advisers Inner Circle Sports to develop expansion models and identify key target markets that could join the league’s five U.S. locations and four in Canada. Sakiewicz said the league has discussions going on in more than 20 markets, including five in Canada, and sees the league eventually growing to about 20 teams. Based off of Inner Circle’s work and the locations in which it’s having discussions, potential markets include Florida, Charlotte, Virginia/Washington, D.C., Philadelphia, Pittsburgh, New York, Boston, Cleveland, Cincinnati, Columbus, Chicago and Detroit.

“Are there 20 markets for which an NLL team could draw 8,000 people? I think there’s room for growth in that league,” said Steve Stenersen, president and CEO of U.S. Lacrosse, which is working on a new alliance with the NLL since Sakiewicz came aboard after years of not having a relationship with the league. “I think 20 is an aggressive figure, but based off [Sakiewicz’s] enthusiasm and experience, I think he’s going to have great success in that regard.”  Sakiewicz said while there are no hard deadlines, the league would like to add a couple of teams in 2018, two more in 2020 and two more in 2022. Sakiewicz, who said the league’s most recent expansion teams have paid expansion fees in the low seven figures, expects the next three new franchises to pay a $3 million fee.  “Our teams are making money,” Sakiewicz said. “We have a lot of teams in our league who are making a significant amount of money, and that’s value.” Sakiewicz, who also wants to eventually pay players year-round to play in the league exclusively, said more than half of the league’s nine teams are annually profitable.

The NLL, which has streamed its games on NLL.com plus the streaming services of ESPN, Fox Sports and TSN, has enlisted veteran sports media executive David Sternberg, principal of Claygate Advisors, to help guide the league through its media decisions. Sternberg said he and the league are about halfway through their evaluation, and expect to make a decision in the coming months, given the directive to have something in place for the start of the 2017 season in January.  Sakiewicz predicted that the league will end up with both an over-the-top streaming service and a traditional TV presence. Sternberg said on top of linear networks and streaming platforms, the league is also in talks with telecommunications carriers, whom he declined to identify, for its media rights.

“As we look at how to distribute the league’s content going forward, we’re looking for partners … who are willing to really invest alongside of us and take a longer-term journey to build this sport’s visibility, awareness and popularity,” said Sternberg. He said the league suffered in the past from doing shorter-term deals with networks that “didn’t have very much skin in the game.”  In anticipation of having a stronger digital presence, the NLL is building a studio at the training center of the Toronto Rock, where two new full-time staff members will produce content such as highlight reels and studio shows for NLL Productions. The league is working with the Brownstein Group on the digital network, as well as on public relations and social media strategy.

The league has relocated from New York City to Philadelphia where it’s sub-leased new office space and can be centrally located among lacrosse hotbeds in the mid-Atlantic. In June of 2018, the league plans to move into its own customized space in the South Philadelphia Sports Complex area.  The league has brought several other key executives on board to help carry out the plan, including Chief Operating Officer Dave Rowan, Chief Marketing Officer Ashley Dabb and Chief Revenue Officer Kevin Morgan. Rowan was Sakiewicz’s former right-hand man at the MLS’s Philadelphia Union, Dabb has long had a presence in Philadelphia and used to work for the Union, and Morgan came to the league after having run his own sales and consulting firm for a decade. Morgan will build the league’s new commercial sales platform that will oversee marketing partnerships. Steve Govett, president and general manager of the Colorado Mammoth, said Sakiewicz is the right person to lead the charge.

“He’s an executioner — he makes stuff happen,” said Govett, who is also chairman of the board of governors of the league, which he added is profitable. “For a league that’s had a stability and stagnancy for a number of years, we need to move the needle, and Nick … has already started to move the needle. This guy’s getting stuff done.”