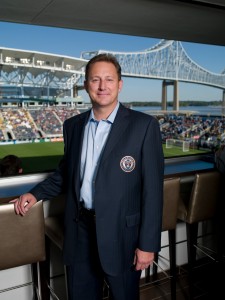 MLS Soccer. A former professional goalkeeper Nick Sakiewicz (pronounced Suh-KEV-itch) joined Major League Soccer as a founding executive in 1995.  Along with a small group of League executives, Sakiewicz helped launch MLS as its first Vice President of Commercial Sponsorship Sales.  Sakiewicz later went on to lead two Major League Soccer teams from 1997-2006 and served as President and General Manager of both the inaugural MLS teams in Tampa and New York. After nine successful seasons in which he was named the League’s Executive of the Year twice (1999 and 2000), Sakiewicz played a key role in the record-setting $100 million sale of the New York MetroStars to Red Bull energy drink company that included the sale of naming rights of the Team and stadium Red Bull Arena.  Nick engineered the deals to build two soccer-specific stadiums. The first was built for the Red Bulls in America’s largest market, the New York / New Jersey metropolitan area. The second stadium was built for the Philadelphia Union and serves the Philadelphia metropolitan area.

Structure, Sales, Marketing and Management.  Sakiewicz is responsible for creating an organizational culture and purpose that established one of the largest season ticket bases in the League.  He is responsible for supporting a small core group of fans during the start-up phase into one of the most revered supporter groups in MLS, The Sons of Ben.  Today at 6,000 members strong the Son’s of Ben represent one of the largest, most organized and fervent soccer supporter groups in the world.  Sakiewicz’ inclusive style directed a portion of the stadium to be designed by the Sons of Ben in order to accommodate their unique fan experience.  That vision and leadership created one of the most incredible supporter atmospheres in the League.  Sakiewicz led the efforts through continuous interaction with the fans to design the Union’s primary badge and other brand identifiers.  Today, the Philadelphia Union stands as one of the strongest selling brands in Major League Soccer and, after a short time, is a growing member of the global football community.

Turning Challenges into Opportunity.  Without the backing of a large sports and entertainment entity, Sakiewicz founded the Union in the face of the worst recession in U.S. history and carefully navigated the two years leading up to the opening of PPL Park the Union’s home stadium on July 27, 2010. After six seasons, the Philadelphia Union stand as a flagship organization in Major League Soccer, performing amongst the very top of all teams in almost every measurable business category.  One of the significant milestones of success the Union and Sakiewicz have enjoyed since launching the club came on July 27, 2012 when, after just three seasons, PPL Park and the Union won the right to host Chelsea Football Club in the annual MLS All Star Game.  Sakiewicz, along with the experienced team of professionals he pulled together have led one of the most respected teams in Major League Soccer and a stadium with one of the best fan-friendly and passionate environments found anywhere in the world of soccer.  After retiring from a shortened professional playing career, Sakiewicz has established a highly successful 23-year career in professional sports team management, stadium/real estate development and motivational leadership.